Now if I was to choose one word which polarised the health and fitness industry the most, this would probably be it. Well, maybe second to booty bands.

The reason this macronutrient causes so much controversy? Well, the ‘benefits and/or health risks’ of carbohydrate debate dates back many years. In fact, it seems to work in a 10-year cycle, whereby at the top of the cycle they are perceived as healthy and 100% essential to diet and at the bottom, they are the number one cause of obesity and consumption is not at all necessary for the human body to function. I see how people are left confused- we have two very different stories here!

In more recent times we have seen people vowing to ‘give up’ sugar as though it is a drug, with many purporting that in fact, it is. And yet we see the likes of that banana-crazy vegan on YouTube telling anyone who will listen that you get abs by eating a vegan diet, which is generally very high in carbohydrate. And outside of the social media sphere, there are some very serious concerns around the amounts of processed foods being consumed is one of the key contributors to the obesity conundrum.

Wading through these mixed messages can be very difficult, and I frequently see people throwing in the towel altogether and deciding to just eat with zero regards to health and 100% regard to instant gratification and pleasure-seeking. Now, TBH, this sounds like fun, however not giving any thought to what goes into your mouth can be on par with over analysing our diet in terms of negative health outcomes.

So where does this leave us? Well, when it comes to nutritional controversy, I always like to provide some key points of information, and then allow the ‘viewer’ to decide how they proceed. And with carbohydrates, this is actually a very effective approach. This blog will be aimed at explaining carbohydrates to you, and hopefully provide enough context around the ins-and-outs of them that you can walk away feeling confident you know where they fit in your diet.

So, let’s start with what carbohydrates are, and how they are used in the body. Carbohydrates are one of the three macronutrients we require to provide energy and nutrition to the body. It is formed from carbon, hydrogen and oxygen (Carbo-Hydrate- see what they did there?) molecules that are broken down and used in the body to fuel our brains, muscles and other cells and to provide fibrous matter for healthy gut function and bowels.

There are 3 types of Sugar (saccharides), and they are the smallest unit of carbohydrates:

Digestion of carbohydrates starts in the mouth and in 1-4 hours all sugars and most starchy carbohydrates will be digested. Fibre remains undigested, maybe fermented and is helpful for regular bowel movements.

As discussed earlier, carbohydrates often get a bad rap for being the lead cause behind the current obesity epidemic, but it is important to acknowledge there use in many of the bodies metabolic processes, and that it is the refined sources of carbohydrate, rather than all sources generally that can contribute to poor health if eaten in large amounts frequently.

Our body can make glucose in times of scarcity (i.e when we eat a low carbohydrate diet) and also utilise ketone bodies, a by-product of the fat burning process, to fuel brain function if required. We store around 2,000 calories of glycogen (our storage form of glucose) in muscle, liver and in the bloodstream. Once these stores a filled up, excess energy intake is either used for our daily tasks or stored in fat cells. See how I said excess energy, not just excess carbohydrates? If you ate excess protein or fat beyond your caloric needs, this too would be processed through a number of pathways and eventually stored as fat.

As a rule of thumb, 40% of daily intake should be carbohydrate, however in saying that, there is immense variability in carbohydrate requirements according to age, gender, activity levels, training load and personal preference. As the preferred fuel for our cells having enough is important, however on the opposite end is the fact that excess consumption, especially of the more refined sources, can contribute to metabolic dysfunction and increased risk of conditions such as diabetes, heart disease and some cancers. So as previously stated, daily intake is very much dependent on the individual and intake needs to be tailored accordingly. Here are some key factors that should be considered when assessing your carbohydrate needs.

One important factor is looking at the QUALITY of the carbohydrates consumed. You will find that the high-quality carbohydrates are the ones that are less refined/processed, look like where they came from, and contain higher nutrient content. They are also harder to overeat on! Take the butter and salt away from a baked potato and I bet you wouldn’t be tempted to overeat them. Yet fry potato (add fat) and roll it is flavouring or salt, and you have a combination that your taste buds can’t say no to. Less processed generally equates to higher quality and lower additives such as salt or hyper-palatable flavourings.

Another useful measure of carbohydrates is the Glycemic Index (GI). GI ranks carbohydrates according to the impact on blood sugar levels after consumption. A number between 0-100 is assigned to carbohydrate-rich foods. Foods are tested in the lab with a test person consuming a 50g serve of available carbohydrates then the results are compared with their response to 50g of while sugar, the reference food for GI. Foods that are high GI cause a faster spike in blood glucose and foods lower in GI causing a slower less dramatic increase in blood glucose (see graph below). A food with a GI of less than 55 is considered low GI and a portion of food with a GI of greater than 70 is considered high GI (everything in between is classed as ‘moderate’ GI). It is a good rule of thumb for assessing types of carbohydrates, however, it is a guide that has some caveats. 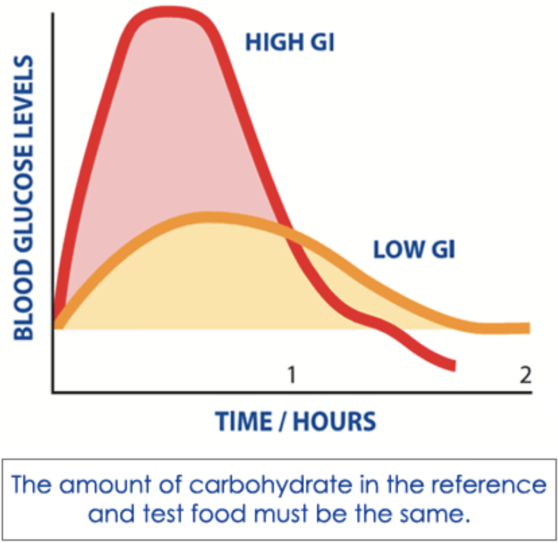 Glycaemic Index does have limitations. Many fruits are classed as moderate to high GI, despite their high nutrient value and healthy fibre content, and as such, should not be written off as ‘unhealthy’ purely based on GI status. Similarly, less healthful foods like chocolate milk, potato chips and pastry are classed as a low GI. This is because the fat content of foods slows down the absorption of food into the blood stream. Further, not all foods can be assigned an index number due to low carbohydrate content, such as meats, so it is important to use GI and a clue to how healthy the carbohydrate source is, but not the sole measure.

There is a long history of research camps battling it out to prove whether fueling endurance sports with fats or carbohydrates is superior. The end results? Well, it’s annoying but the answer is probably both. Our body can use either macronutrient to fuel exercise, specifically endurance exercise. There are countless case studies and research articles on how fats are superior for fueling long-distance cycling and running, as fat becomes the dominant substrate for energy production in sub-maximal exercise. However, for every pro-fat study, you will find a convincing argument for the use of carbohydrates as fuel to spare muscle mass and to give the body a fast source of energy. These days the research is showing that instead of it being a black and white scenario, it is likely that we can maximise the use of both substrates in the body. ‘Metabolic flexibility’ is the term used to describe the scenario where a person can efficiently switch between the use of fats and carbohydrates according to their availability. It might be that an athlete can have regular access to nutrition and as such might be able to push hard after consuming a gel on the bike during a triathlon. However, there are many scenarios where nutrition may not be as accessible, and during these times it is advantageous for an athlete to be able to efficiently run on fat stores without flat-lining until further food stops can be reached. So, it can be seen that it is less important to dedicate yourself to one camp, and more important to be across how to use both fats and carbohydrates to your advantage.

And finally, it is important to touch on the benefits of fibre to the health of our digestive system. Fibre is the indigestible component of plants. While fibre does not provide energy/calories, it does provide important nutrition to the little colonies of bacteria in our gut that help us digest our food, take charge of our immune system and help with vitamin production. The fibre we derive from common sources such as vegetables, fruit and whole grains is highly important for a healthy gut. Fibre also plays an important role in ensuring our bowels are moving efficiently as disposing of waste from our body. Plus, fibre helps to keep us full and slows our stomach emptying.

Hopefully, this summary of carbohydrates assists in helping you to assess your carbohydrate choices and daily needs. The key is really, spread it out across your day to avoid large serves in one sitting and concentrate most of your intake when you need energy, like before and after training.  When you are more active add in some extra serves, and when you are less active, reduce the serves you consume and keep to the whole, unprocessed sources.

Below is a guide for how many serves you should consume on a daily basis, along with quality choices and what a serving size is, according to the Australian Guide to Healthy Eating.

If you want to know more about tailoring your carbohydrate intake, book in for a consultation with Athletic Eating via the bookings page of this website.